EDITION 3
EDITION 2
EDITION 1
AUSGABE 3
AUSGABE 2
AUSGABE 1
TRACTO INSIDER
IN DIALOGUE: with the Regional Sales Managers
it´s all in the mix

Four different personalities with individual strengths and one common goal: to bring TRACTO's trenchless technology to the forefront worldwide. This is the best way to briefly describe our Regional Sales Management team. Early 2021, the team around Int. Sales Director Tamer Kayan was reorganised to become even stronger.

The term “Regional Sales Manager” really says it all. Our international sales are divided into territories, each of which is the responsibility of one manager. Considering that the TRACTO technology is sold all over the world, you can imagine that each of the four is really quite busy. It helps that they are all passionate salespersons, who go about their tasks with great passion. After all, the RSM’s not only service our customers worldwide, but also our sister companies and international sales partners.

Daniel Mertens has been a successful RSM in international sales for more than 15 years. Down-to-earth and 'home-grown', he is in charge of very different markets from France to Scandinavia, the Baltic States, Poland, the Czech Republic, Slovakia and the emerging African continent. Daniel is absolutely positive about the future prospects: “We have huge potential worldwide. Our common goal is to be as powerful abroad as we are here in our home market in order to further increase the share of trenchless construction with TRACTO in our target markets.”

Business economist Pierre Hagn looks back on more than 20 years in sales of capital goods. Besides his native language “Bavarian”, he speaks English like all his colleagues, but also Portuguese and Spanish. His sales territory includes North America, Latin America, Great Britain, Italy and the Iberian Peninsula. In England and the USA, Pierre sees very good opportunities for our HDD technology despite massive competition, and in politically turbulent Latin America he is trying to convince customers of the superiority of TRACTO machines over competing brands, especially from China.

Arthur Foth goes about his tasks according to the motto “Where there’s a will, there’s a way”. The industrial engineer looks after Ukraine, Hungary, Georgia, the CIS states, the Balkans and the Middle East. Despite a glut of Chinese products, Arthur, who speaks Russian, sees the Russian market as promising and is certain “that we can convince people there with our quality products”. He sees a lot of potential for pipe bursting in the Balkan states, where the improvement of water supply is being promoted with EU funds.

Tim Uffmann had been selling pilot pipe jacking systems for a long time and lived in Malaysia for several years in this capacity. He is responsible for the Southeast Asian markets, but also Australia and Benelux. Tim generally considers Southeast Asia, with its megacities, as “predestined for trenchless technology” and he feels Australia is “one of our top HDD markets outside Europe.” Tim also sees opportunities for HDD technology in Belgium through direct sales and relies on long-time sales partner Frank Meerman in the Netherlands, especially with e-mobility and FTTH.

All four see their diversity as a great advantage, because “different perspectives ensure that problems are viewed from all sides”. This can only be good for TRACTO. 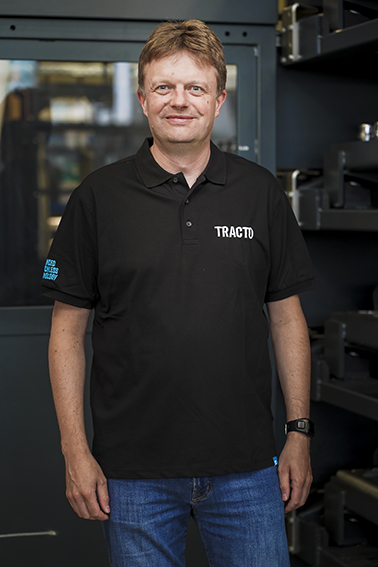 Professional experience: At TRACTO in the international sales team for 15 years now
Languages: German, English, French (Basics)
Sales Areas / Supported Partners:
France / TRACTO France
Scandinavia, / Gunnar Guldbrand A/S (DK, NO), Vretmaskin EL (SE), JT- Plant Oy (FI)
Baltic States / OÜ MASINATEENUS (EE), Trakto L, (LT) UAB GRUNDOTECH (LV)
Slovakia / ZEPPELIN SK S.R.O.
Poland / DTA Technik, HKL Baumaschinen
Czech Republic / IINTERGLOBAL DUOAfrica / TRACTO Afrique
How do you assess the potential for trenchless technology in your sales area?
The NoDig method and our premium machine technology have huge potential worldwide. It is our aim to be as powerful abroad as we are here in our domestic market, in order to increase the share s of trenchless construction with TRACTO products in our target markets.
What is important to you in terms of co-operation with partners and customers? Do you have a personal motto?
I don’t really have a special motto. I like my job, my colleagues, our partners and our customers. The daily challenges we are confronted with and need to be mastered, are what identify our industry and, in short, I (almost) always enjoy my work!
What do you think makes you stand out as a team?
At the beginning of the year our team was regrouped and I am really glad, that the new colleagues have settled in very quickly. However, the "big" team - with product management, product specialists and marketing up to production department - also plays an important role for our success. We can only be as strong as every little cog in the system allows us to be.
Pierre Hagn 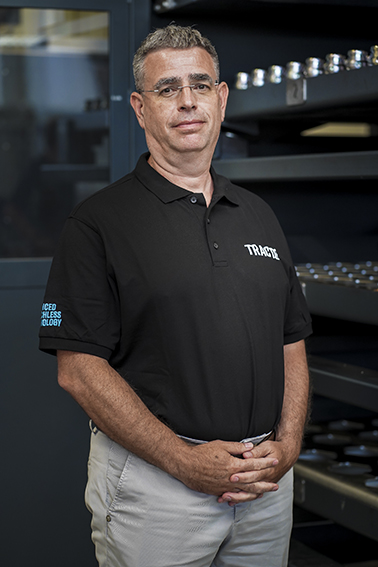 How do you assess the potential for trenchless technology in your sales area?
Very different, depending on the area. In the sister areas i see a lot of potential, especially with regards to Grundodrill, but in Italy for instance, we are only just setting up a powerful sales unit. The Iberian Peninsula is still suffering from the effects of the 2008 crisis, while Latin America is a continent with ups and downs and highly influenced by politics. Therefore, we have to try to retain the customers over there, which are not taking up the numerous Chinese offers.

What is important to you in terms of co-operation with partners and customers? Do you have a personal motto?
My motto is „United we stand, divided we fall!” I think it is very important to start a project, work on it and complete it together. Everyone should see themselves as equal parts of the whole unit. For me personally, it is a great drive to be able to participate in the future development of the TRACTO company.

What do you think makes you stand out as a team?
Good teamwork with leadership that sees itself as part of the team and acts accordingly. The diversity of the team which rubs off each other and therefore generates energy, which can then be used to positive effect. 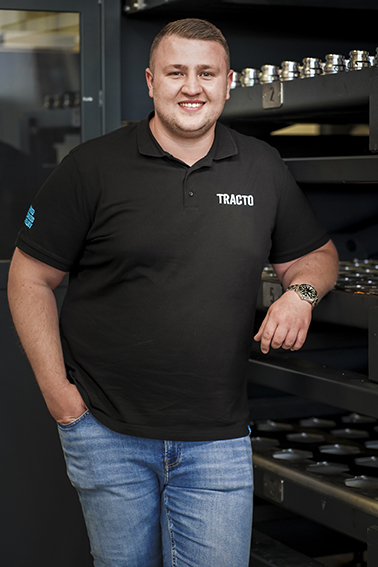 Professional experience: B.Sc. Industrial engineer, several years experience in after sales at a caterpillar bore rig manufacturer. Active sales of used machines, as well as complete service support of distributors and retailers.
Languages: German, English, Russian (Basics), Spanish (Basics)
Sales Areas / Supported Partners:
Hungary / VIBORPAC Kft, SDS SZEKERES
Rumania / VOLTRAK s.r.l., Allemania Eurotech s.r.l.
Bulgaria / Euromarket Construction, ECOSOL
Russia / OOO UIR 701
Balkan States / SOLMEX d.o.o.(HR), Dukamam (RS), Trade d.o.o.(SI) u.a.
Ukraine, Georgia
Middle East
How do you assess the potential for trenchless technology in your sales areas?
A lot of markets are expandable and could prove interesting for TRACTO in the future. Especially in the Balkan States topics such as pipe renewals, are promoted by the EU-subventions to minimise the problem of water losses. The Russian market is being overloaded with Chinese products, but I feel sure when the political situation begins to stabilise, we will also be able to convince  potential customers with the quality of our products.
What is important to you in terms of co-operation with partners and customers? Do you have a personal motto?
My motto would be „If you don’t try, you won’t succeed!“ The environment in which we find ourselves with our products is a future-proof market and it gives me great pleasure to be part of the company’s growth! Watching the individual cogs working within a company, in order to satisfy the customer together, is a great incentive.
What do you think makes you stand out as a team?
The team harmonises really well and the team spirit is great. The different views of each single member allow us to examine a problem from all angles.
Tim Uffmann 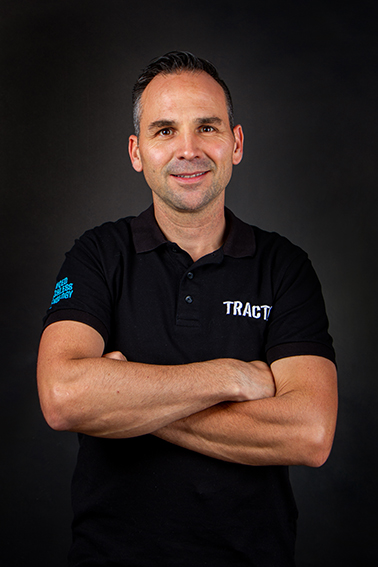 Professional experience: Machine operator for auger drill units at Bohrtec. Sales and distribution of Bohrtec auger drill units in Asia, while living in Malaysia (2013-17)
Languages: German, English, Spanish (basics)
Sales Areas / Supported Partners:
Australia / TRACTO Australia
Asia / McAllen (CN), Kingdom Eagle International (HK), ITOCHU TC, LIFELINE Co.(JP), Trenchless Technology Pte Ltd (MY, SG), Wise Industrial Systems Inc (PH) zeck Tse International  (TH), Grand Superior Int. (TW)
Benelux / MEERMAN JR B.V. (NL), EUROMAT, SEMAT Interparts, Heuninck B.V.B.A. (BE), SERMATEC Sarl (LU) HDD via direct sales
How do you assess the potential for trenchless technology in your sales areas?
Australia is evolving into the top HDD market outside of Europe. By introducing the new generation GRUNDODRILL xCS, there is a greater potential for us in the Australian market.
Asia (South-East Asia) will become an important market for TRACTO in the foreseeable future. During this development phase, Indonesia with its impressing enormous economic growth will be our main focus.
Generally speaking, South-East-Asia is pre-destined for trenchless technology, as it allows work in the narrow streets of its metropolises without additionally disrupting traffic. Due to my personal connections to this part of the world I really feel positive, that we can be more successful in these markets in the near future.
The top 5 metropoles in South-East-Asia are Jakarta/Indonesia (35 million inhabitants), Manila/Philippines (23m), Bangkok/Thailand (17m), Ho Chi Minh City/Vietnam (13m) and Kuala Lumpur/Malaysia (8m).
As in the past, we will work in the Netherlands together with Frank Meerman, which will certainly provide a lot of fun in the coming years with a view to the continuing good order volume in the fields of e-mobility and FTTH. Belgium has great potential, similar to the Netherlands. Thanks to excellent groundwork over the past few years, we were able to conclude our first HDD sale this year (18ACS / Gefor) after a long dry spell. With our new set-up in Belgium and the direct sale of HDD rigs, we are soon going to place more systems on the market.
What is important to you in terms of co-operation with partners and customers? Do you have a personal motto?
Customer orientation is important to me, especially authenticity and my own enthusiasm for the product. I don’t want to sound stereotype, but honesty lasts the longest and is what convinces the customer at the end of the day.
In my opinion, TRACTO is on the right track with its growth strategy, even if you notice from time to time that the assumed shortcut took a bit longer than the old familiar path. That is part and parcel of growth and won’t stop us!
What do you think makes you stand out as a team?
We have only been a team since the beginning of 2020 and will certainly need a bit of time to sort ourselves out properly, but then we will perform all the more strongly and skilfully! We are a mixed bunch with everybody being different in is own ways. It should be noted that as a team we have already managed to get essential topics for international sales off the ground in the shortest possible time, creating a good starting position for future business.
Back to the overview